In this tutorial, we will be building a bridge between WAGMI and Fuji. This bridge will help us to transfer native WGM coin wrapped into wWGM back and forth from the WAGMI chain to the Fuji chain. Using this guide, you can deploy a bridge between any EVM-based chains for any ERC20 tokens.

The wrapped version of a native coin is its pegged ERC20 representation. Wrapping it with the ERC20 standard makes certain processes like delegated transactions much easier. You can easily get wrapped tokens by sending the native coin to the wrapped token contract address.

WAGMI is an independent EVM-based test chain deployed on a custom subnet on the Avalanche network.

We will be using Chainsafe's bridge repository, to easily set up a robust and secure bridge.

Workflow of the Bridge​

WAGMI and Fuji chains are not interconnected by default, however, we could make them communicate. Relayers watch for events (by polling blocks) on one chain and perform necessary action using those events on the other chain. This way we can also perform bridging of tokens from one chain to the other chain through the use of smart contracts.

Here is the basic high-level workflow of the bridge - 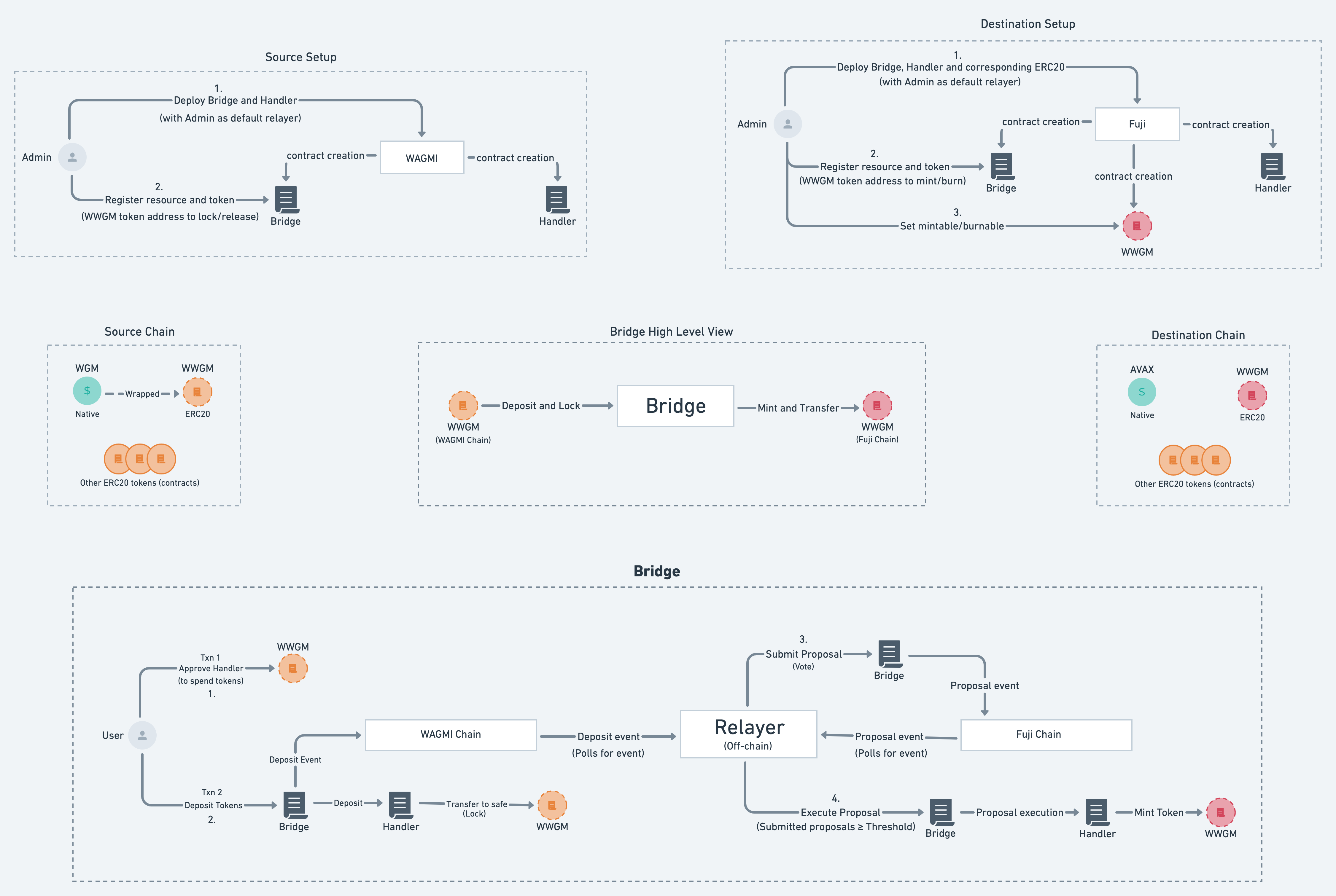 Let's make a new directory deploy-bridge, where we will be keeping our bridge codes. We will be using the following repositories -

Using the following command, we can clone and install Chainbridge's command-line tool. This will help us in setting up bridge contracts and demonstrating bridge transfers. Once the bridge contracts are deployed, you can use its ABI and contract address to set up your UI.

This will build the contracts and installs the cb-sol-cli command.

Let's set up environment variables, so that, we do not need to write their values every time we issue a command. Move back to the deploy-bridge directory (main project directory) and make a new file configVars. Put the following contents inside it -

Every time we make changes to these config variables, we have to update our bash environment. Run the following command according to the relative location of the file. These variables are temporary and are only there in the current terminal session, and will be flushed, once the session is over. Make sure to load these environment variables anywhere you will using them in the bash commands (like $SRC_GATEWAY or $SRC_ADDR)

We need to set up our source chain as follows -

The command-line tool cb-sol-cli will help us to deploy the contracts. Run the following command in the terminal session where the config vars are loaded. It will add SRC_ADDR as the default relayer for relaying events from the Wagmi chain (source) to the Fuji chain (destination).

One of the most important parameter to take care of while deploying bridge contract is the expiry value. It is the numer of blocks after which a proposal is considered cancelled. By default it is set to 100. On Avalanche mainnet, with this value, the proposals could be expired within 3-4 minutes. You should choose a very large expiry value, according to the chain you are deploying bridge to. Otherwise your proposal will be cancelled if the thereshold number of vote proposals are not received on time.

You should also keep this in mind that sometimes during high network activity, a transaction could stuck for a long time. Proposal transactions stuck in this scenario, could result in the cancellation of previous proposals. Therefore, expiry values should be large enought, and relayers should issue transactions with a competitive max gas price.

The output will return deployed contracts' (Bridge and Handler) address. Update the configVars file with these addresses by adding the following 2 variables and loading them to the environment.

Make sure to load these using the source command.

Run the following command to register the wWGM token as a resource on the source bridge.

We need to set up our destination chain as follows -

Run the following command to deploy Bridge, ERC20 Handler, and wWGM token contracts on the Fuji chain. Again it will set DST_ADDR as the default relayer for relaying events from Fuji chain (destination) to Wagmi chain (source). For this example, both SRC_ADDR and DST_ADDR represent the same thing.

Update the environment variables with the details which you will get by running the above command. Don't forget to load these variables.

Run the following command to register deployed wWGM token as a resource on the bridge.

Setting Token as Mintable and Burnable on Bridge​

We cannot mint or burn any token which we do not control. Though we can lock and release such tokens by putting them in a token safe. The bridge has to know which token it can burn. With the following command, we can set the resource as burnable. The bridge will choose the action accordingly, by seeing the token as burnable or not.

Now let's permit the handler to mint the deployed ERC20 (wWGM) token on the destination chain. Run the following command.

The deployer of the contracts (here SRC_ADDR or DST_ADDR) holds the admin rights. An admin can add or remove a new relayer, minter, admin etc. It can also mint new ERC20 tokens on the destination chain. You can issue these commands using cb-sol-cli with the options mentioned in these files. The mint command should not be used manually, unless some intervention is required, when the relayers failed to mint the tokens on the destination chain on time.

All the on-chain setups like deploying bridges, handlers, tokens, etc. are complete. But the two chains are not interconnected. We need some off-chain relayer to communicate messages between the chains. The relayer will poll for deposit events on one chain, and submit vote proposals to mint or release the corresponding token on another chain.

Since we set the relayer threshold to 1, while deploying the bridge and handler, we require a voting proposal from only 1 relayer. But in production, we should use a large set of relayers with a high threshold to avoid power concentration.

For this purpose, we will be using Chainsafe's relayer. Follow the steps described below to deploy the relayer.

Now, move to the deploy-bridge directory and run the following command to clone the relayer repo (implemented in Go), and build its binary.

This will create a binary inside the chainbridge/build directory as chainbridge.

The relayer requires some configurations like source chain, destination chain, bridge, handler address, etc. Run the following command. It will make a config.json file with the required details in it. You can update these details, as per your need.

Check and confirm the details in the config.json file.

In the above command, you can see that blockConfirmations is set to 0. This will work well for networks like Avalanche because the block is confirmed once it's committed. Unlike other chains such as Ethereum, which requires 20-30 block confirmations. Therefore, use this configuration with caution, depending on the type of chain you are using.

It can cause serious problems if a corresponding token is minted or released based on an unconfirmed block.

Give relayer access to your keys. Using these keys, the relayer will propose deposit events and execute proposals. It will ask to set a password for encrypting these keys. Every time you start the relayer, it will ask for this password.

The setup is now complete - both on-chain and off-chain. Now we just have to start the relayer and test the bridge. For testing purposes, we will be using cb-sol-cli to make deposit transactions on the bridge. But you can make your front end and integrate it with the bridge using the ABIs.

Run the following command to start the relayer. It will print logs of all the events associated with our bridge, happening on both the chains. So keep the relayer running and follow the next commands in the other terminal session.

Approve Handler to Spend my Tokens​

Now, let's deposit tokens on the WAGMI bridge. But before that, we need to approve the handler to spend (lock or burn) tokens on our (here SRC_PK) behalf. The amount here is in Wei (1 ether (WGM) = 10^18 Wei). We will be approving 0.1 wWGM.

Deposit Tokens to the Bridge​

Once approved, we can send a deposit transaction. Now let's deposit 0.1 wWGM on the bridge. The handler will lock (transfer to token safe) 0.1 wWGM from our address (here SRC_PK) and mint the new tokens on the destination chain to the recipient (here DST_ADDR).

This transaction will transfer 0.1 wWGM to token safe and emit a Deposit event, which will be captured by the relayer. Following this event, it will send a voting proposal to the destination chain. Since the threshold is 1, the bridge will execute the proposal, and new wWGM minted to the recipient's address. Here is the screenshot of the output from the relayer.

Similarly, we can transfer the tokens back to the WAGMI chain.

Similar to the above process, you can deploy a bridge between any 2 EVM-based chains. We have used the command-line tool to make approvals and deposits. This can be further extended to build a frontend integrated with the bridge. Currently, it depends on a single relayer, which is not secure. We need a large set of relayers and a high threshold to avoid any kind of centralization.

You can learn more about these contracts and implementations by reading ChainSafe's Chainbridge documentation.